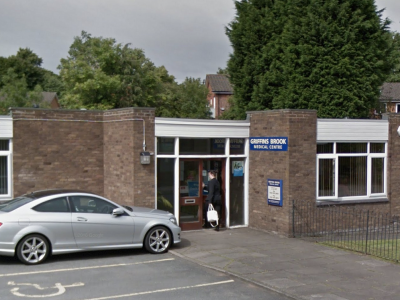 Centre was built on the leasehold land of the Charity called the Bournville Village Trust. The build was commissioned by Dr John Haslam in partnership with Dr David Emery in 1969. Both were previously working from 1020 Bristol Road, Selly Oak, Birmingham, now, interestingly, the site of Mill Health Centre, Leatherbridge, the fictional GP practice in the BBC TV series ‘Doctors’. Dr Haslam sadly died on 18 July 1970 at the early age of 38, only a month after the completion of Griffins Brook Medical Centre. His courage and philosophical acceptance of his illness were long remembered by his patients to whom he was devoted.

We became a GP training practice in 2011 and then began teaching medical students in 2019.

Being purpose built, Griffins Brook Medical Centre has managed to grow from a building serving 1800 patients, to serving 4000 patients, by way of several internal adaptations over the years. However, we have finally completely outgrown the building with no more space to adapt. We are therefore looking forward to moving to our new building, College Green Medical Practice, although with sadness, we will leave many fond memories behind at Griffins Brook Medical Centre.

This website uses cookies to improve your experience while you navigate through the website. Out of these cookies, the cookies that are categorized as necessary are stored on your browser as they are essential for the working of basic functionalities of the website. We also use third-party cookies that help us analyze and understand how you use this website. These cookies will be stored in your browser only with your consent. You also have the option to opt-out of these cookies. But opting out of some of these cookies may have an effect on your browsing experience.
Necessary Always Enabled
Necessary cookies are absolutely essential for the website to function properly. This category only includes cookies that ensures basic functionalities and security features of the website. These cookies do not store any personal information.
Non-necessary
Any cookies that may not be particularly necessary for the website to function and is used specifically to collect user personal data via analytics, ads, other embedded contents are termed as non-necessary cookies. It is mandatory to procure user consent prior to running these cookies on your website.
SAVE & ACCEPT
Translate »
Skip to content